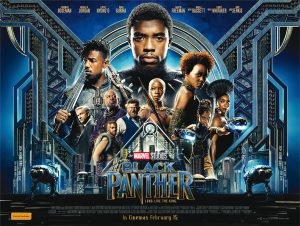 I saw Black Panther somewhere in Long Island on opening night. Every theater showing was sold out and they were adding more as people lined up at the concession stand. I was ready. I walked to my soft, red recliner seat and waited patiently for the pièce de résistance. In the past, I’ve never been at a movie showing where I didn’t care for the previews. I sat there as if sitting at a dining table waiting to devour the sweetest, juiciest, thick steak dinner accompanied with an impeccable, chilled red wine. Oh man. The lights darkened and we were about to enjoy what the eyes were ready to feast on.

I have to say, the movie was everything that celebrities, radio hosts and social media heads said it was going to be after seeing it at early premieres. The opening scene was the year 1992 in Oakland, CA. The opening scene gets your eyes fixated on what seems like typical street hustlers scheming to sell heat to the locals but as it unfolds it turns out they’re much more than we initially thought. The street hustlers are Wakandans! One was the mastermind and the other one intently followed the others instructions. At that moment, I was whisked into a world that was familiar and foreign at the same time. A world I’ve never known of and dreamt about all my life. It froze me to my chair and my mind locked in.

Black Panther is what I needed. It’s what black fans needed. It’s what every Marvel and non-Marvel fan needed. A world rarely seen and flat out unknown. I live in the film/TV business where the only non-white cinema I saw regularly (in my tween years) was Asian cinema. It was a meticulously crafted world in its architecture, clothes, dining and overall tradition in Chinese culture. I loved the days of The Five Deadly Venoms, The 36th Chamber of Shaolin, Drunken Master and Snake in the Eagles Shadow. It was fascinating to see the screen filled with something other than the typical American TV shows at the time. You may think it was all about the fight scenes (of course, that was the highlight) but it was also the philosophy interwoven into the film. It was the love of early Saturday afternoons.

Flash forward back into the large sold-out dark room. Here we are. It’s as if my being flew in with the sleek ship piercing the invisible shield cloaking the world of Wakanda. It was at this moment my eyes started to water and a slight lump swelled in my throat. It was something to take in to see a fully developed city of African origin undisturbed by outside interference. A sight of the technology, the architecture, and the variety of people going about their lives in their culture. A series of questions ricocheted within my head: What would Africa be like uninterrupted? How advanced would it have been? What would the spiritual system look like? How far would Wakanda reach in miles? How would humans interact with nature within its walls? Now, of course, Africa has cities but, from what I know, it was not done 100% by African hands and mind. And if it has, are they just copies of other outside cities? How much of African culture and thought would be built into the city structure? I can only imagine. 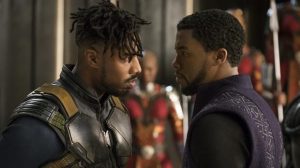 As for T’challa and Killmonger, their relationship was layered in so many ways. For T’challa to find out his father, T’chaka, killed his own brother (N’jobu) after interrupting his business to sell Wakandan technology was shocking! Erik was willing to destroy everything related to him for the sake of exacting African vengeance! Was it for a legitimate reason? Based on the convo on social media, people softened to N’jobu’s illegal exploits because of the reality of African pain from colonialism. N’jobu’s heart ached that African people were being over-policed and disenfranchised. What was Wakanda to do? N’jobu took it upon himself to spread the technology. He failed. He died by T’chaka’s hand. However, the plot continued in an unexpected villain-to-be: Erik Killmonger, N’jobu’s son. In stories of the battle between good and evil, it’s so simple to side with good for obvious reasons. When a story like this comes along, it’s not so clear-cut. Our natural disdain in a “good vs. evil” story against evil subsided slowly as the movie played out for both N’jobu and Erik.

Erik and T’challa’s story also represents another matter between African-Americans and Africans. Most African-Americans understand our roots to Africa but where do we stand with our brothers and sisters on the continent? A complicated one as expressed between Erik and his father in the spirit realm after Erik consumed the heart-shaped herb. A bridge between our two populations hasn’t been completely constructed. Our presence has been felt through music, dance and a few crossover stars but we lack a direct message and strategy that links the African presence throughout the diaspora to the continent and vice-versa. As Africans in America, are we lost or, as Erik said to his father, the ones who stayed behind are the ones truly lost? This is a question that must be explored if Africans (within the Diaspora and in Africa) are really looking to bond with each other politically and economically.

I won’t go through every touching scene but a few that caught my eye was Everett K. Ross’ role in Black Panther. It was fitting that he was not expected to be “The Last Mohican” of Wakanda but as a visitor witnessing and respecting the decisions of the people. When he did step out of line, he was quickly reminded of his “guest” position. And when he was needed, he was asked to assist in the mission led by Shuri, Okoye and Ramunda. These are lessons to all white allies of how they should carry themselves when dealing with issues unique to Africans and POCs in general. Also, the scene when T’chaka spoke to his sister about non-profit outreach in Oakland, the entire event of the Wakandan people watching T’challa’s ritual fight for right as Wakandan King, and Okoye rejecting her straight-haired wig while undercover with T’chaka and Nakia in the casino. She blurted, “This looks ridiculous!” I just smiled wide when she said that. I wonder if black women got that part? I sure did.

Keeping it real, Black Panther is a Marvel creation. It’s a comic made by two white guys in the 1960s. Today, it’s the 18th film making an appearance in the MCU (Marvel Cinematic Universe). Yes. But it’s so much more. It’s a wish come true for some people. Specifically, African-Americans and Africans on the continent. It’s symbolic of African excellence, the richness of what could be and what was taken away. Cinematically, Black Panther is a mega-film that’s not a period piece about slaves or a silly comedy or about being a drug dealer, or a basketball player or a raunchy stripper. It’s a mega-movie that presents African people as what they once were before colonization. It’s the thousands of years of exceptionalism peaking at one point or another over the ages. Black Panther is the potential of where Africa can be. Black Panther is the beauty of a matriarchal society where women are held in high-esteem, protectors of the culture next to men and glorious in its depiction of people standing tall with pride, honor and respect. Even though it is a fictional story, it’s one giving us a refreshing look other than what has been shown to us since we were children. Black Panther is the movie we wanted when all other black movies being thrown at us was on some sub-par bullshit. It was the movie we wanted while well-made period pieces were winning Oscars. We supported it for being good films but we really wanted something more than the 13 years or the goals of black folk only going as far as Mudbound. We finally have it. Black Panther. T’challa. A King. He stands proud, free and strong. A king reaching out to us… filling us all with the spirit of the panther!